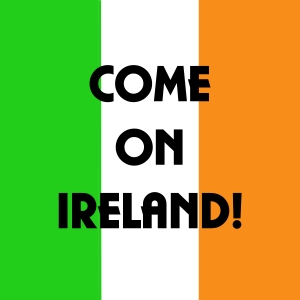 One of the more bizarre things I can list amongst my artistic achievements is award winning songwriter. Here’s the short version of how that came to pass. Back in 2010, our leading newspaper The Irish Times put out a call to write an alternative Irish anthem. It was to be judged by members of the band The Duckworth Lewis Method, as well as Irish rugby international Frankie Sheahan, and then Arts editor Shane Hegarty (who has since gone on to write the superb Darkmouth novel series). I had written half of the song (the simple repeated verse) some years previously during a rowdy, boozy party in my apartment in Queens, New York. When this competition cropped up, I called upon my friend Enda Roche to help me record it. But let me work backwards through the song to capture some of the creative process.

Once in the studio we had the fun idea of adding a primitive Irish language call and response element. So I drew on the simplest phrases from my primary school days:

You’ll notice in the second rendition of the chorus, I actually get the call and response wrong and ask in Irish “Cá bhfuil tú?” [Where are you?] and Enda’s brother Kevin, who was assisting on backing vocals, improvised a perplexed sounding response of “Níl fhios agam!” [I don’t know!]. When we listened back to it, it made us really chuckle, and somehow had echoes of a real Irish primary school classroom, so we left it in.

Given that the song could only be 90 seconds long I knew that brevity and sing-along-ability was the key, hence I kept it to an extremely simple structure especially the bombastic foulmouthed verses:

The swearing seemed fitting with the Irish vernacular, but knowing that the winning song would air on the national radio station Today FM (on the Ray D’Arcy show) we sensed it might be a good idea to bleep it in some way, so I cooked up the most Irish way to do that – the sound of a sheep baa-ing. It seems mad that we even considered this fact, expecting full well to not win the thing.

The opening Irish language countdown –“A haon, dó, trí, ceathar dhéag . . .” — was a reference to U2’s song Elevation which was out at the time (where Bono counts it in bizarrely as “Unos, dos, tres, catorce” [one two, three, fourteen]. So we thought we would give a nod to that, and have it almost as an Easter egg for U2 fans (of which I am a huge one).

When the Irish Times announced we were the winners I couldn’t quite believe it. I particularly loved Shane Hegarty’s description of it in the Irish Times as “somehow angry, fun and patriotic all at the same time” which described it far better than I ever could have and pretty much made my day. I recall them playing several of the runners up on Ray D’Arcy’s show and I seem to remember D’Arcy being kinda snotty and dismissive of my song, but it didnt matter really, his blood clearly wasn’t boiling for Ireland. I do remember Thomas Lewis from The Duckworth Lewis Method saying he liked it because it sounded like something you’d sing at 3 in the morning.

It has since gone on to be our signature tune at The Brownbread Mixtape and we close every show with it. We ask everyone to rise for the alternative Irish national anthem and it never fails to get a huge reaction. I still love performing it, partly due to the energy it brings to a room, and equally for how utterly ridiculous it is that it won an award.

One of the prizes for winning the competition was time in a Dublin recording studio, where I gathered many of my favourite performers from past Brownbread Mixtape shows to record a sort of gospel reworking of My Blood is Boiling for Ireland that has never seen the light of day. I will dig it out and post it at a later date (along with the other song we recorded that day which was a soul number I had written for the occasion). But for now, crank it up to catorce and shout it with me — COME ON IRELAND!