For over a decade I hosted and curated a live monthly variety show called The Brown Bread Mixtape, and it took place upstairs in the legendary Stag’s Head pub here in Dublin. Those eclectic, electric nights in that old Victorian room were some of the most fun and creatively exciting times I’ve had.

As I mentioned in my previous post, I recently stumbled across a digital treasure trove of recordings from the shows and I put together a handful of mixtapes from the shows that captures some of the best moments. This volume is centred around spoken word poetry, which is a deep passion and love of mine, and the mixtape features some of the finest practitioners of the art form on this little island of Ireland from the past decade. Storytellers, lyricists, polemicists and rhymers, whose wonderful words will wash over you. The featured poets are John Cummins, Erin Fornoff, Colm Keegan, Raven (RIP), Catherina Behan and Stephen James Smith 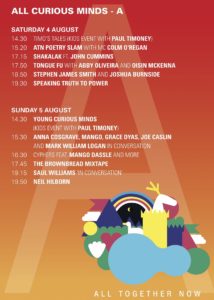 If any of you Ireland-based folks are heading to the All Together Now festival this weekend, I will be hosting an incredible Brownbread Mixtape show on the Sunday with some of the finest spoken word artists in the world (Jasmine Gardosi and Erin Fornoff), as well as performing some classic radio-style comedy skecthes with our resident troupe The Brownbread Players. There will be plenty of singalongs, silly stories and a rousing rendition of My Blood is Boiling for Ireland too. It would be great to see some warm, friendly faces at the show. Pop by and say hello, and stick around for some of the other LEGENDS onstage at the event throughout the weekend!

Back in 2014, the poet Dave Lordan, was serving as guest editor for Penduline Press – a publication from Oregon in the United States. He commissioned a special audio broadcast from me to showcase some of the very best contemporary performance poets in Ireland. I had never really tried something like it before but I was really excited about trying to piece something that was representative of the many great voices in Ireland at the time, as well as making it an audio piece that was enjoyable to listen to, maybe even informative, and maintain a good energy and rhythm to it, so it actually flowed like a proper album. There was also something nice about taking the time to go back through the archives of the endless hours of audio from all of the many poets at the brownbread mixtape shows, and handpicking some of the standout moments. (I was even cheeky enough to put one of my own poems in there from the Fringe show “Three Men Talking About Things They Kinda Know About”. More on that show and the unique creative process of writing a show collaboratively in this post.) The curation process was really hard and ended up being super subjective of course (but isn’t all curated content?) and I decided to not script my interludes, but instead to speak from the heart about how these poets and their work had connected with me. That conversational tone felt right for the piece and it flowed relatively well. Then once I found the haunting simple piano piece by Irish musician Elder Roche, it all seemed to click into place. The end result was something I am really proud of and I totally stand over today. I actually think it serves as a nice snapshot of the variety of spoken word in the country at that time. And it is a proper document now. Many of the poets have deservedly gone on to greater success as performers and published writers, which is so brilliant to see. They are listed below. Seek them out, they are all legends.

Here’s what Dave Lordan said about the documentary at the time:

“[the brownbread mixtape] is a very professionally run cabaret and it has featured many of the most engaging and entertaining live arts practitioners in the country. Kalle is an excellent host and curator, a fact proven by the popularity of the monthly event. Everybody wants a gig at The Brownbread Mixtape. [ … ] Kalle probably has the closest to an overview of performance poetry in Ireland and he was the obvious choice to make a showcase selection for Penduline.” – Dave Lordan, Guest Editor, Penduline

Here is a list of the poets in order of appearance:

1. Stephen James Smith – “The Gardener”
2. John Cummins – “Brink”
3. Abby Oliveira – “the television”
4. Karl Parkinson – “The Positivity Manifesto”
5. Raven – “High John”
6. Erin Fornoff – “Hymn to the Reckless”
7. Brian Conaghan – “Waiting for the penny to drop”
8. Colm Keegan – “Ireland Is”
9. Fergus Costello – “Extract from a letter to the fella that used to be married to my sister”
10. Kalle Ryan – Excerpt from “Three Men Talking About Things They Kinda Know About”

Here is the original link to the publication in Penduline Press: